The Courtyard, heir to the Roman and Arabic tradition, in Viana it has its broadest historical representation: from the neighbouring courtyards of medieval origin, an example of local architecture, to the Renaissance courtyards as symbols of power and lineage.

PThere are many palaces, but none are like Viana. Because in Viana, behind sober white walls, just dotted with open spaces that leave us guessing the interior, which take the form, as in any other building in Córdoba and Andalusia, the delight of the courtyards, those spaces made of air in which the architecture is at the service of the garden; where homage is paid to plants, flowers, light and water.

In the courtyards of Viana, art leaves the frame or pedestal to materialise in a simple and affordable experience to smell, see and feel what is alive. In the Viana Palace we can make a historic and sensory tour of the Córdoba courtyards without leaving the building. Five centuries of history make up Viana.

Five centuries where the courtyards have always been the protagonists of this building that has grown almost organically, the result of additions and alterations over time. A lived in house inhabited until the late 20th century by noble families, however, with great traditional character.

The Córdoba courtyard, heir to Roman and Arabic tradition has in Viana its greatest historical representation.

In spring 2012, the courtyards of Viana Palace opened to the public in a new and fresh way. Thanks to an elaborate process of reinterpretation of heritage, visitors can learn all the keys to experience the Cordoban courtyards: a surprising visitor reception centre, a new historical tour of the courtyards, interactive multimedia formats, information on thematic routes about the courtyards of Córdoba, guided night time tours to the courtyards and the palace.

The Courtyards In Viana, behind the sober white walls we discover the delight of the courtyards, those spaces made of air where architecture is at the service of the garden. 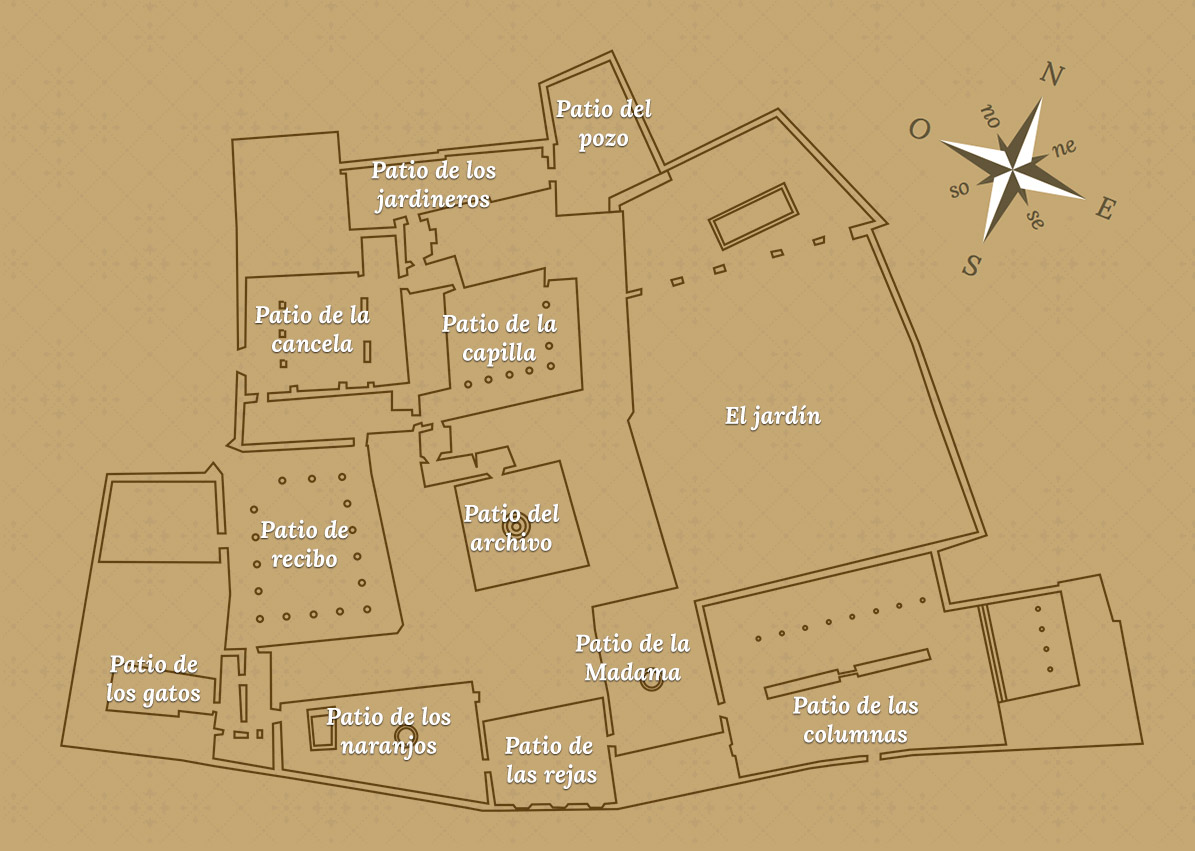 From the late 16th century, the main entrance to the Palace. The courtyard, has a trapezoidal shape, and is surrounded by porticoed galleries supported by Tuscan columns, where the column of the angle of the façade is missing, allowing access to the carriages into the Palace. As its name suggests, it is a reception courtyard for visitors, an authentic forerunner to what the palace stores.

Courtyard of the Cats

This courtyard has the distinction of being the oldest documented community courtyard in Córdoba, as the communal houses that make it up, known in the 15th century as the Houses of Puentezuela de Tres Caños, were purchased by the owners of palace in the 16th century, and maintained as rental properties until the mid 18th century.

The Courtyard of the Orange Trees

A Courtyard which reminds us of the Muslim tradition of an Arab orchard garden. The garden was for Muslims a private area where water and plants were used as the main decorative elements. The agricultural use as shown by the citrus trees that grow in the courtyard were added to this function.


Courtyard of the Bars

Together with the Courtyard of the Gate, the only one that looks to the outside of those in Viana, this one in particular through its three windows closes its bays with wrought iron railings that give name to the street it looks out to, the Bars of Don Gome, the Palace owner’s name at this time.

This courtyard, warm and intimate court, is named after the nymph of the fountain, which in Greek mythology were the fresh water nymphs. The fountain, in which calla lilies grow, is surrounded by a circle of trimmed cypress trees, planted during the era of the 2nd Marquis of Viana in the early 20th century. This type of plant architecture is called topiary.


Courtyard of the Columns

The construction of this courtyard is of the eighties, when the Palace was already open to the public. It is conceived as a place to energize Viana and host events that involve more interaction with visitors. Currently, one of the main sites of the cultural programme of the CajaSur Foundation.

Courtyard of the pool

This is the most modest courtyard of the Palace. It is a service courtyard, also called the Greenhouse, and formerly known as Courtyard of the Deer. The water is aerated and oxygenated in the pool before being used for watering the palace’s plants.


Courtyard of the well

The well is the real star of this service courtyard. The well takes its water from the Colodro stream, which flows underground and provides enough water to supply all the courtyards and fountains in the palace. The 3rd Marquise of Viana added some decorative elements for a more stately air to the setting.

Courtyard of the gardeners

It got its name through being used to store the gardening team’s tools. This completes the set of service courtyards of the palace. Its present appearance is due to redecoration made by the 3rd Marquise of Viana to this patio. The wall completely covered with plumbago and decoration made with tiles make it stand out.


Courtyard of the gate

Current access to Viana, it was the entrance courtyard of the house of the Counts of Torres Cabrera, purchased by the owners of the palace in the 19th century, with which it lost its function as an entrance courtyard. The architecture of this court differs substantially from other Viana courtyards, the walls covered with brick to which overlook balconies with beautiful ironwork. The pavement of the courtyard, cobbled in two colours.

Courtyard of the Chapel

Main courtyard of the houses of the Counts of Torres Cabrera, from the 17th century, named for the existence of an adjoining chapel and was moved by the 3rd Marquise of Viana to the current reception, having recovered today its original location.


Courtyard of the Archive

EIt is the innermost of all Viana courtyards and a sample of more sober Cordoban Baroque. On the mezzanine is the valuable historical archive of Viana, consisting of over 400,000 documents, the oldest of the 12th century.