The Viana Palace Archive has its path linked to the vicissitudes of the owners of the Viana Palace in Córdoba. Its original collections start with documentation of 15th and early 17th centuries generated by the family that made the palace their main home: the lords of Villaseca, Marquises since 1703. In 1765 it starts to be built and located, distributed in six rooms, in a mezzanine that is located around the courtyard which is precisely called of the Archive. By then, the Marquise of Villaseca succeeded at the head of the Belmonte and Moratalla house, and her husband added the title of Count of Villanueva de Cárdenas, adding to the archive all the documentation that accompanied these successions. 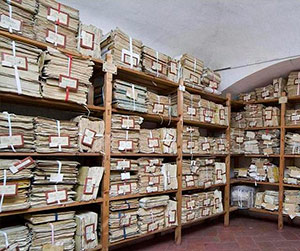 The first third of the 19th century saw another wave of collections, while the subsequent Villaseca succeeded in new titles and entailed estates. In 1873, when the widowed Marquise of Villaseca remarried Teobaldo Saavedra, the Palace and the Archive went on to belong to the Viana house, and what is more, the Marquises Carmen and Teobaldo instituted as heir his nephew, José, Count of Urbasa, and logically these titles were then incorporated to the archive. José Saavedra and Salamanca, 2nd Marquis of Viana, will be the most significant owner in the Archive. Herein coincide three characteristics: first, his role in Spain under Alfonso XIII, who was a friend and of whom he became a prominent member of his court; second, the arrival of new titles to the archive with him; and third, that since 1918, he understood its historical importance and decided to exhibit some documents in display cabinets in the palace itself and include it in the route of selected tourist visits, moreover with a clear commitment to convert the mansion into a museum, acquiring for this purpose important collections of leather, tiles and silverware. Only his early death in 1927 prevented him from completing new galleries dedicated to paintings.

His son Fausto magnified the Cordoban palace with the heritage that he brought in 1956 from his Palace of Madrid, sold to the Ministry of Foreign Affairs, and to the Archive with the titles that he succeeded to. In 2000, Jacobo Hernando Fitz-James Stuart, Duke of Peñaranda and 4th Marquis of Viana, his nephew and successor, sold the Historical Archive of Viana to CajaSur, an entity which in 1980, under the name of Caja Provincial de Ahorros de Córdoba (Provincial Savings Bank of Córdoba), had acquired the Viana Palace where it was kept.

The Historical Viana Archive is shown as a jewel where research can be undertaken on people from the History of Spain of which there are hardly any documentary sources; carry out studies on lordships, towns, titles, pious works or on the government of local elites; and expand knowledge and data on aspects regarding social, political, cultural, economic, religious and everyday life, from the data provided in the documents that the archive looks after.